You can generally find your RPO (Regular Production Option) code sticker in your center console or rear storage bin. Your build sheet will have your RPO codes also. 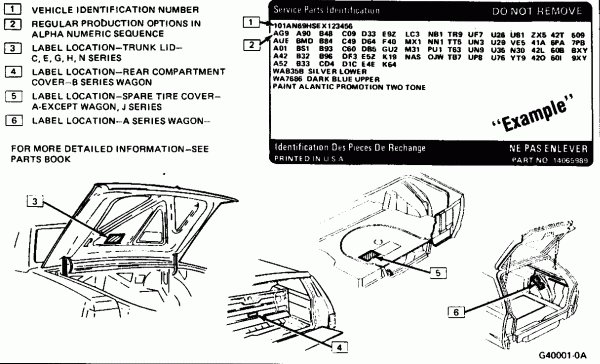 A Regular Production Option (RPO) is a General Motors standard coding for vehicle configuration options. These codes are a combination of 3 alphanumeric characters and refer to a specific option or modification to the vehicle. These codes signify how the vehicle is built during production and thus the specific configuration of a vehicle as it exits the factory up to and including the paint color can be described by specifying the base model and the complete list of RPO codes used during production. Even a vehicle with no extra-cost options will have some RPOs, as information like the engine type and exterior paint color are always specified.

A few RPO codes have become notable enough that they have been used as model names. The Camaro Z28 name came from an option code which specified a performance-oriented configuration. This happened again with the Corvette Z06 models. Although most RPO codes that are promoted to model names are speed-oriented codes, the Z71 off-road suspension code for trucks became notable enough that the code was promoted to a model name, turned into a logo and applied as stickers onto the rear quarter panel of vehicles with the Z71 package.

Many RPO codes have been reused over the years. For example, the ZR1 performance option was available for the 1970 Corvette, the 1990 through 1995 Corvette, and the 2009 Corvette. In some cases (such as this), the RPO specifies a package with similar function (in this case performance) to previous uses of the code. For RPOs that never became notable the code may be reused for entirely dissimilar options.